Starting in September 2022 the Film Festival will be back to screening films at 7:00 pm on the First Tuesday in the sanctuary of the Unitarian Universalist Church of Oak Cliffl  We will continue screening films focusing on an important social justice issue. Moving forward, we will be holding our screenings once every quarter. We hope you'll leave inspired and ready to hit the road in your own quest for a better world.

The best way to make a difference in the world is to first learn how others have done so. Is there a film you'd love to see to inspire you? Perhaps you have that one movie that just recharges you before a social justice battle. If so, please share with us, and we'll see about putting it on our list of films to show at the UUCOC First Tuesday Social Justice Film Festival.

September 6th:
The Death and Life of Marsha P. Johnson 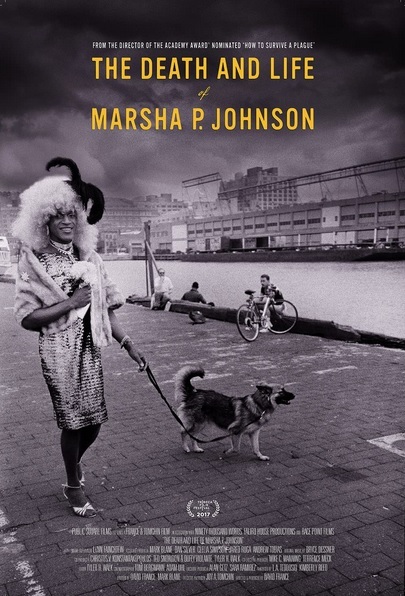 The Death and Life of Marsha P. Johnson uses the belated investigation into an activist's murder as the framework for a sobering look at the ongoing battle for equal rights. The film chronicles Marsha P. Johnson and Sylvia Rivera, prominent figures in gay liberation and transgender rights movement in New York City from the 1960s to the 1990s and co-founders of Street Transvestite Action Revolutionaries. The film centers on activist Victoria Cruz's 2017 investigation into Johnson's death in 1992, which was initially ruled a suicide by police despite suspicious circumstances.

Since the CDC has now declared Dallas County's risk of COVID infection to be high, and Dallas County is now recommending an increase of the risk level to orange, we want to strongly encourage everyone to please mask up for our screening at this time and observe social distancing.

Please continue to submit your suggestions for films for us to screen
when things get back to 'normal'!

As 501(c)3 organizations, the Unitarian Universalist Church of Oak Cliff/First Tuesday Social Justice Film Festival
and the Dallas Peace & Justice Center do not endorse any political candidate or campaign.


Do you need directions to the film festival?


Do you have a suggestion for a film we should screen?


We proudly offers the Williams Sound Personal PATM listening system for the convenience of those needing hearing assistance.